Posted in Portugal
Beautiful Portugal Vineyard Wedding at a heart of Mafra town took our breath away as we photographed each moment of this glorious union. Winery weddings are classy: everyone knows that. Quinta de Sant´Ana in Gradil is one of our favorite rustic Wedding venues in Portugal. It incorporates everything: style, nature, authenticity, and love. It is always a pleasure to go back there and photograph the couple´s important life moments.
There are so many places for the perfect Vineyard Wedding in Portugal. And one of the most significant benefits is the most delicious wine to savor during a cocktail hour or before 🙂  This was one of the most beautiful Quinta de Sant´Ana weddings we photographed. The weather was perfect, the couple was deeply in love, and everyone just wished the best to the new husband and wife.
We met the couple a few months before their Portugal wedding. And it was only on the wedding day itself that we met in person. It still blows our mind that we have a job that allows us to create such incredible stories! We are the luckiest. The wedding day was flawless, indeed the most dreamy Gradil Autumn weather. We spent the morning getting ready with the girls, having happy banter, getting their hair and makeup done in the Venue´s room until it was time to head to the Vineyards for the ceremony.
During the cocktail hour guests relaxed with drinks by the raw bar, enjoyed some Portuguese Wine tasting, and admired the gorgeous Quinta de Sant´Ana Venue. The reception was full of dancing, laughing, and so much love! These two love each other so profoundly, and their handwritten vows, caring kindness to each other was enough to make anyone break down and cry.

Than you for allowing us to be your Quinta de Santana Wedding photographers! We wish you an abundance of happiness for the years to come.

There are some weddings where we, as wedding photographers, want to leave our gear and join in on the wedding reception fun. And such was the case during Saloni and Brian Sangeet Wedding in Forte da Cruz, Estoril.

This was day 1 of 3 of their Indian wedding in Portugal festivities. Sangeet and Mehendi started the celebrations where girls have their henna done to join all the happy party for Sangeet which is the reception of guests and launch of the party with dance performances and music and delicious Indian food savoring. It was such a pleasure to begin their wedding events in the picturesque Forte da Cruz in Estoril, Portugal. The old fortress used to be closed and abandoned, but recently it has been renovated and is a host and Portugal wedding Venue to a lot of beautiful destination weddings. And it is such a stunning landmark in Estoril. Its glory and splendor are the best for honoring gorgeous wedding festivities.

Tha had been a fantastic day where guests from all parts of the world came to celebrate the couples Portugal Destination Wedding. And all the guests said one thing, that the soon to be wed pair has a special something. We could see the spark between the gorgeous couple that only shows up from pure love and bonding. We are so fortunate to be their Portugal wedding photographer and not only have we been enriched culturally through this event, but also our we gained new friends around the world. It was our debut photographing a wedding at this Forte da Cruz wedding venue, but it has been a first of many, and all festivities we have had the honor of documenting has a unique charm that only an ancient building can give.

We hope that our photographs depict just how beautiful this Indian Wedding in Portugal was. 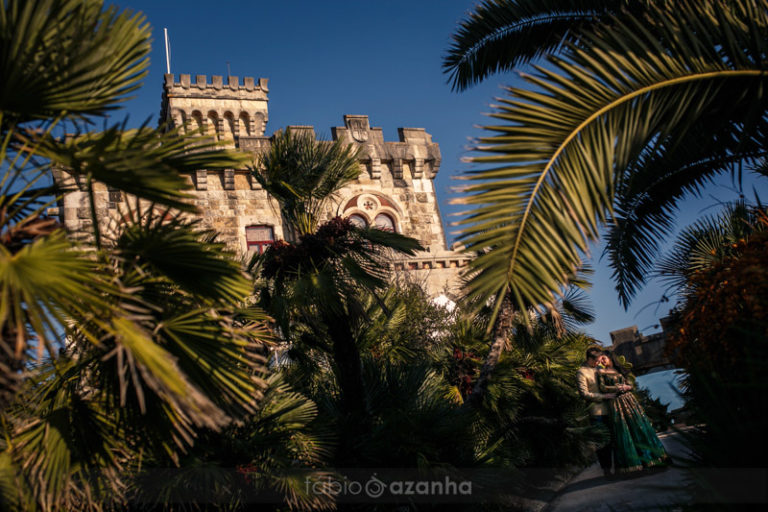 Last summer I had the great opportunity to shoot my first destination wedding in Portugal with Carolina & David, a cute half-French half-Portuguese couple. Since I wanted to make the most of it, we met in Porto the day before their wedding so we could shoot an engagement session in the Portuguese capital. Our story started right there, on Gondarém beach, a beautiful white sand beach just outside Porto.

That engagement session was a great opportunity to get familiar with each other and a chance for Carolina & David to get used to my camera. We took some really good shots in the beautiful city of Porto. Unfortunately, things didn’t go as expected. David received a call from his best man who was supposed to land in the evening. He was stuck in France where air controllers had decided on a last minute strike! For David, this was devastating, and a great source of stress since most of his relatives was supposed to fly on that day to Portugal! In a way, he was lucky because the strike only affected the one airport his best man was flying from…

Getting ready in a typical Portuguese house

Carolina & David did not want to see each other before the ceremony at the church. So they got ready in separate houses located next to each other. David was helped by his mom, and I could tell she was very emotional about the wedding. At one point David took a letter out of an envelope and started reading it. The couple had this brilliant idea of exchanging letters on their wedding day, which they would read during the getting ready.

Carolina did read her letter too. But to do so, she sat by the window behind a curtain. In the old times, this is exactly the place where the bride would wait for her husband-to-be to come by the window and shout his love for her. 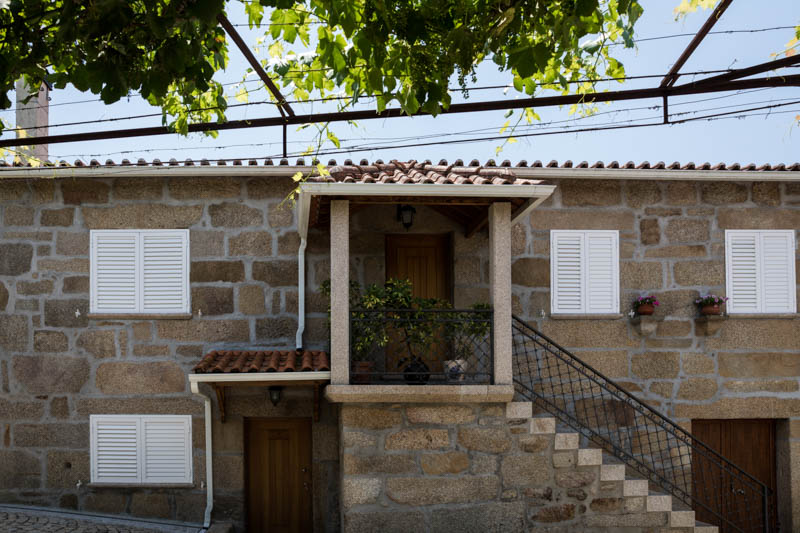 A wedding ceremony in Viseu, Portugal

The wedding ceremony took place in a magnificent church in the small town of Viseu. There was a lot of emotion going with speeches by the closest relatives, including David’s grandfather, a 90-year-old man who had traveled all the way from France!

Next to the church there was this superb court with Roman arches. I thought I’d do the portraits there.

Wedding party inside an hacienda

The party took place in an ancient hacienda, renovated for weddings. I was so happy to shoot in such a beautiful location. There were some great candid shots to take there during the cocktail. Especially around the swimming pool when the sun was going down.

This was a fantastic experience for me, and I can’t wait to shoot another wedding in Portugal!

Meet gorgeous Renata and Harry and their beautiful Portugal Wedding in Monserrate Palace. This couple is one of the sweetest and cutest husband and wife to be, that we photographed!

For mid-September, we just could not have asked for much better weather and climate, especially the wedding being in the heart of Sintra, that tends to be very very wet.  Everything fell into place perfectly for these lovely two lovebirds and their families.

We have photographed many times at the Sintra Monserrate Palace,  and we especially adore the stunning outdoors with Morrocan style architecture and the gorgeous little palace itself.  A lot of the wedding was DIY, and friends have contributed significantly in helping the couple to make the day a dream come true for the couple.

The weather was perfect on the day, and they had an unseasonably warm and sunny day in the gorgeous Sintra Venue! As we were arriving at the venue a thin layer of cloud appeared which broke the harshness of the sun. Interestingly though, on the day after the wedding, the weather took a turn and became very gloomy, windy and wet.

The after ceremony cocktail hour was at the main venue entrance. There was a live music trio, and appetizers and Harry embellished the gorgeous day with his singing talent. Frank Sinatra´s best tunes were sung throughout the cocktail party which took us back to the golden 60ties. Then the couple made a great first entrance, and after speeches, dinner laughs and fun time all party move for a nightlong disco.

We were so lucky to be the photographers at this gorgeous couple´s Portugal Destination wedding. They are such a fantastic couple, and we are happy to have shared their story with you all.

Such a beautiful Portugal Destination wedding in Monserrate Palace that we are happy to be a part of.

It was Penha Longa Golf Resort that hosted the Portugal Destination wedding of Aditi and Jerónimo, a lovely couple that has their life settled in busy New York but decided to tie the knot in Portugal- the groom´s hometown. The bride is from India, and so her side of the family had to fly over, but they thoroughly enjoyed the venture which allowed them to get to know beautiful Portugal.

For the last four years together they spent time living in three different cities. Their love for families, celebration, sharing, and togetherness, was an inspiration for how they wanted their wedding to be. Something about being in a with their friends and families makes them completely present with each other.

And so their Portugal Wedding had to be with all their loved ones cherishing and sharing those special moments. Many Indian culture touches had made the wedding extra special, and as Portugal wedding photographer it brought up so much vividness and exotic feel that the pictures speak for themselves. There are a lot of great Portugal Wedding Venues, and Penha Longa Golf Resort is one of the great places where couples can enjoy their wedding day in an elegant yet intimistic fashion.